I thought I’d bring up an amazing lesser-known brew called cyser. This beverage has ancient origin and can be the most amazing beverage you will ever touch to your tongue. Using the right apples and a good quality honey can create a rich, crisp, even buttery apple flavor that will likely make you regret having to swallow each sip. Cyser is usually produced in very small batches commercially and it is pretty darn hard to find a bottle to buy short of importing it from a small meadery somewhere in Europe. There is actually an eHow article on how to find it and buy it, if you want to skip the brewing and go straight to the tasting, but I don’t recommend that when it is so rewarding to make your own – not to mention cheaper; I’ve seen $60 32 oz.bottles of the (real) stuff on e-Bay. 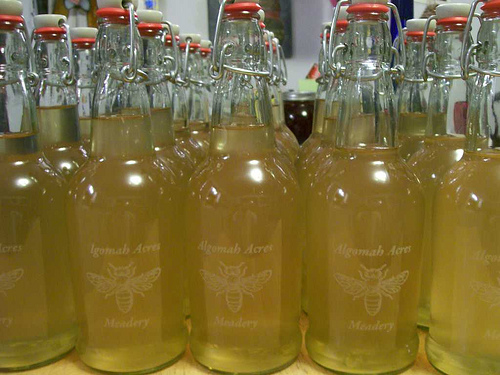 The origins of cyser are traced back to the prime days of mead, about 8000 years ago. This was the original apple cider. Thousands of years later, Druids popularized the apple in Europe and the apple brewing Renaissance began, resulting in variety after variety of cider – the main alcoholic beverage of the people until the late 1800’s. Apple orchards actually paid part of their wages in pints of apple cider to their workers. Cyser is beyond apple cider though, and worth the extra effort, I think. Brewing cyser is a reenactment of an ancient tradition. This is not a task for a beginning brewer, and it is more of an investment than a beginner would probably be willing to put in, not so much financially as for the fact that you won’t have the use of a carboy for several years. If you only have one or two carboys and you want to keep up on your brewing, skip this one until you have enough carboys to put one aside for a few years. Things you will need:

A lot of patience (2-5 years worth)
A 5 gallon airtight container that will fit a stopper and air stop – I’m going to assume you will use a carboy
A 5 gallon glass carboy with a stopper and air stop (secondary fermentation)
4 1/2 gallons of the absolute best apple juice you can find, preferably freshly pressed and not oxidized
1 gallon of honey (half now and half in a month)
A tablespoon of a fruit wine yeast (I use Epernay II)

How to get started:

Make sure everything is sanitized just like you would sanitize when making any brew.
Add the tablespoon of yeast to one of the containers of apple juice before you pour it in and give it a good shake.
Pour all 4 ½ gallons of the apple juice into your carboy.
Warm up ½ gallon of honey by setting it’s container in hot water until the honey is mostly very runny.
Add the ½ gallon of honey to the carboy – don’t worry about mixing it up.
Stopper it up and put it in a cool dark place for up to a full month and at least three weeks.

Now is the time to re-rack your cider, so get a carboy sanitized and ready.
Heat up ½ gallon of honey by setting it’s container in hot water until the honey is mostly liquid again.
Go ahead and add the warm honey to the empty carboy and then rack away.If you have too much cyzer and it looks like it will overfill your secondary fermentation vessel, pour it into something else and drink it. It is delicious even this far before its full bloom.
Re-stopper your secondary fermenter.

This is the part that requires patience and self control. If you had any extra cyser when re-racking it, you will probably have the taste imprinted in your memory and want to drink some more. But you CAN’T! Not for a minimum of 2 YEARS. A lot of cyser recipes and commercial versions of cyser will tell you that you can make cyser just like a cider using something like a 3 week primary and 3 week secondary fermentation period. This is complete bullcrap. Don’t do it. REALLY. DON’T DO IT!!! Honey is expensive and you can make a delicious cider in that period of time that doesn’t require all of that honey and will provide just as much enjoyment. It makes me mad that someone would suggest it, even. A cyser that will knock your socks off is going to be 2 years old at least. Period. 2 year old cyser is young. A 5 year old cyser will taste even better than a 2 year old cyser. If you don’t believe me, just try it. It will only take 5 years to double check. It is the same deal as with mead. A 1 year old mead has a taste only a mead drinker will like – kind of gross. A 5 year old mead… that is a completely different story. A 5 year old mead has a flavor just about anybody would enjoy. Don’t ask me how or why it happens, but it does.

Bottle it up and serve it – no bottle conditioning because it isn’t supposed to be bubbly!
I like it served ice-cold. Wow is it good.

Sanitation is key at the beginning of the process. For something that you are investing this much expensive honey in, you want to make sure everything you use is sanitized. After the primary fermentation stage, you are not likely to have any problems because the alcohol level is up and the yeast is going to bully out most of the likely contaminants that won’t die because of alcohol content.

Aging the mead can be done in bottles if you want to transfer it to bottles after the second month. Two months is enough time for alcohol conversion that leads to significant gas release, the rest is just flavor development. It would be easier to store this way in some cases. Since it isn’t carbonated or bottle conditioned you can put it into a wine bottle or a beer bottle. Technically, cyser is a fruit and honey wine.

Try adding spices and seasonings to your cyser when reracking it. Some good spices to use are: Mace, Nutmeg, Cinnamon, Cardamom, Coves, Ginger, Citrus Rind, Rosemary.

Not all honeys taste the same. For cyser, all honeys will make something amazing, I promise, but some meaderies swear by Orange Blossom, Buckweat, and Clover. If you have a choice and can’t remember the varieties, always choose the darkest honey for your cyser.

UPDATE 4/4/2013 : Okay, so it is over five years later and I’m down to one bottle of cyser. One little bottle. I can’t bear to drink it, so I might keep it forever. I had an eight year old mead once, and it was an insanely decadent treat. Maybe I’ll wait until the eight year mark for that last bottle.